Alienware’s x15 and x17 gaming laptops feature today’s highest-end mobile hardware. It’s no surprise that they both serve up great performance. What makes them so exceptional, though, is their ultra-thin form factors. Dell’s engineers pulled out all the stops to build faster systems that are also sleeker than anything else in Alienware’s portfolio.

Getting there wasn’t easy. The team had to come up with new ways of moving heat quickly and quietly. It formulated a new thermal interface material, shaped airflow through the system with four dynamically controlled fans, created tailored power states, and implemented a thermal control offset to limit CPU temperatures.

All those electrical and mechanical innovations are part of Alienware’s Cryo-Tech engineering approach. In this second chapter of our four-part series, we’re digging deep into a few of the technologies comprising Cryo-Tech.

When you need a better thermal interface material, you design it yourself

Whether you’re gaming, rendering video, or compiling code, today’s CPUs are constantly trying to operate at their fastest frequencies (inside of strictly defined specifications, of course). If you can keep them at lower temperatures for longer periods of time, they’ll reward you with better performance. The challenge, particularly in a laptop form factor, is shuttling thermal energy away from the processor as quickly as possible.

Common practice is to cover the CPU with a water-filled heat pipe or vapor chamber, both of which do a great job of drawing heat to where it can be exhausted out of the chassis. But before the heat pipe or vapor chamber can work its magic, the processor’s waste heat must cross that threshold from silicon die to copper surface. Thermal interface materials (TIMs) inserted between them improve the rate at which heat is conducted up into the cooling system. As you might imagine, advancements in TIM technology can have a huge impact. 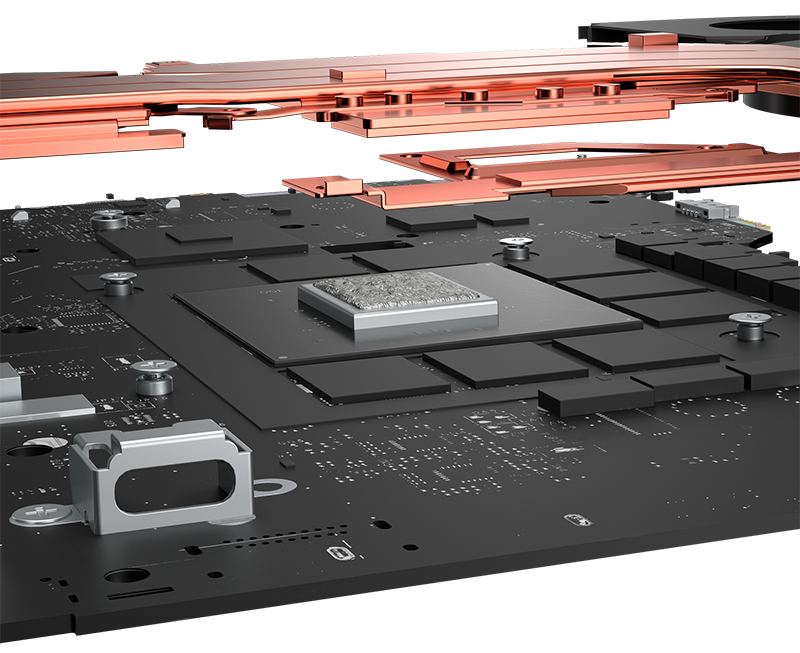 Element 31 pulls heat away from the CPU faster than previous-generation TIMs, allowing the x15 and x17 to maintain higher clock rates for longer.

As they designed the x15 and x17, Dell’s engineers knew that a higher-performing TIM would pull heat away from Intel’s 11th-gen Core CPUs faster, allowing them to hit higher Turbo Boost clock rates for longer periods of time. So, they helped develop a gallium-based TIM encapsulated in silicone, which came to be known as Element 31. Upon application, it looks like grease. However, when the right amount of pressure is applied, the encapsulation breaks and the gallium forms conductive channels that deliver a 25% improvement in thermal resistance compared to the previous generation. Silicone around those channels serves as a protective barrier to prevent degradation over time.

A ton of testing went into proving Element 31’s thermal performance and robustness—both critical traits in a cutting-edge gaming laptop. Backed by thousands of thermal cycles and a battery of environmental tests, you can be sure that Dell’s specially formulated liquid metal is ready for years of marathon gaming on the x15 and x17.

Dial in the perfect thermal response with four intelligent fans

The engineering team’s next priority was maximizing airflow through each platform’s ultra-thin chassis. They started by optimizing both motherboards for density. Shrinking their footprints freed up room in the 15” and 17” form factors for four cooling fans. These fans were carefully selected for performance, power consumption, and acoustics. They run on 12 volts, so they’re incredibly efficient under light loads. But they can also burst lots of airflow through the chassis when it’s needed. Each fan’s blades are composed of a Kevlar-like liquid crystal polymer, which is significantly stronger than traditional plastics. That increased structural integrity makes it possible to use larger impellers. In turn, the fans move more air. 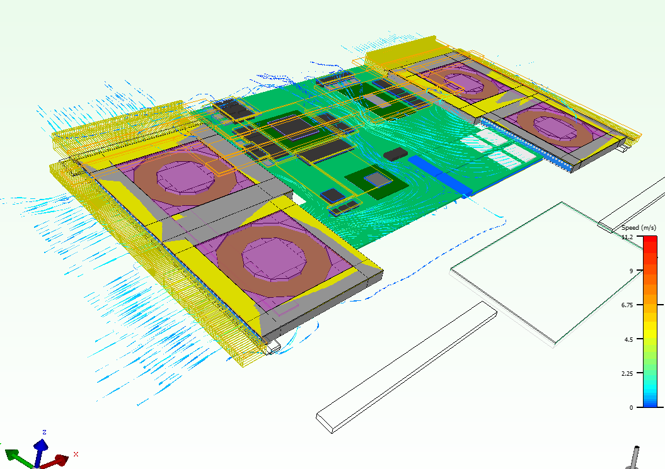 Dell then went a step further, mixing fan technologies to get just the right amount of positive pressure blowing through the laptops and exhaust releasing heat.

The two fans in the back are evacuative. They focus on the CPU and GPU, pulling in cool air from vents on the top and bottom, then blowing it out a pair of outputs on the rear deck and sides. A third, Dell-patented fan uses dual opposite outlets with an oversized impeller that occupies 90% of the housing enclosure. Half of its airflow blows through a fin stack, helping cool the CPU and GPU. The other half drives positive pressure across the motherboard, cooling whichever SSDs you have installed in the M.2 slots. Fan number four exhausts latent heat in the chassis, bringing down skin temperatures on the surfaces you touch.

There are several other cool, but less obvious engineering details that make the x15 and x17 two of Dell’s freest-flowing laptops to date. For example, the team worked especially hard to optimize impedance—resistance to pressure—so very little of the fan’s energy is lost to friction. The honeycomb-shaped intake, the foot height, the foot location, and the vents are all tuned for tiny pressure drops. That means more of what the fans kick out is pushed through the fin stack.

With four fans targeting different zones in the x15 and x17, Dell’s engineers had an unprecedented opportunity to really fine-tune the systems’ response to various workloads. Sensors spread throughout both platforms feed telemetry data that’s used to independently control each fan’s speed. A CPU- or GPU-intensive task like gaming is going to elicit a swift response from the back two fans, while a big file transfer or unusually warm skin temperature might trigger the dual opposite outlet fan up front. Instead of cooling everything all the time, smart fan control gives the x-series far more granularity, translating to a better user experience. 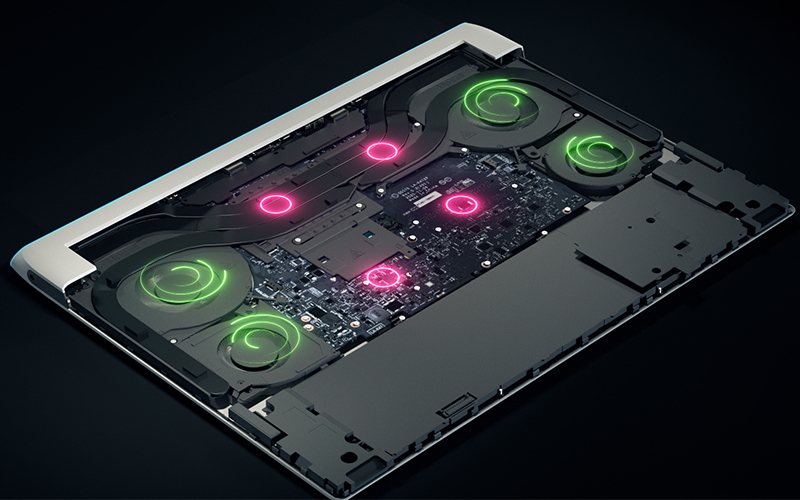 Data from sensors all over the x15 and x17 feeds a new algorithm able to independently control their four fans..

Our next blog post is going to go deeper on Dell’s tailored power states and the thermal control circuit offset—two more critical components under the Cryo-Tech technology umbrella. But it’s worth mentioning here that those power states, referred to as Thermal Profiles in Alienware Command Center, go hand in hand with the company’s other cooling innovations. Each profile behaves like a different gear in a car’s transmission. Depending on the workload, you can prioritize all-out performance, GPU-specific tasks, a balanced approach, cool temps, or quiet computing. The interplay between hardware and software is by design, and Dell makes it possible to really customize the x15 and x17 based on what you want from them. More on those modes soon.